UPDATE: One of the ways Ethiopian is making its flights safe! - January 14, 2016

If you wander around the Ethiopian Airlines Aviation Academy (EAAA) you might be surprised to hear splashing sounds. On closer inspection you might find what look like cabin stewards and stewardesses jumping out of half an airplane onto a blow-up slide and into a swimming pool! The scene is oddly familiar. Perhaps you’ve seen something similar on the in-flight safety information? They are training on a Cabin Emergency Evacuation Trainer (CEET). At Ethiopian we put passenger safety above all else, which is why we have ordered a second CEET from EDM due to be installed at the end of this month, January 2016. 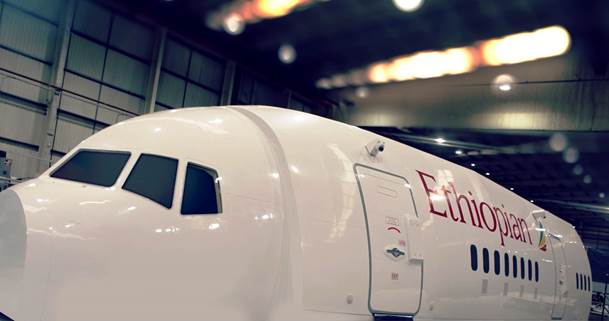 The manufacturing company, EDM, based in Manchester, UK, announced on January 13 2016 that it has shipped the Cabin Emergency Evacuation Trainer (CEET) to Ethiopian Airlines and currently it is in Djibouti.

The CEET has a dual B787 / B777 configuration allowing Ethiopian Airlines’ cabin crew to train on both aircraft models. The trainer has business and economy class seats, a replica galley, W/Cs, cabin attendant seats and associated control panels.  It is also fitted with SEPTRE, EDM’s industry-leading audio-visual system which includes pre-programmed emergency scenarios such as aborted take-offs, engine fires, gear collapses, turbulence, and ditching and decompression making it the most advanced cabin crew training system on the market.

The CEET will join the rest of the cabin crew training equipment already built and installed by EDM as part of this major contract with Ethiopian Airlines which includes a B737 CEET on an electric motion system and A350, B767 and Bombardier Q400 door trainers.

To support instructor training, each EDM training simulator has a similar Instructor Operating Station (IOS) interface and common features across all of the equipment to help the crew to get used to the simulators quickly.

By expanding our safety training facilities, Ethiopian, the fastest growing and most profitable airline in Africa, is making good on its commitment to passenger safety. The new CEET is part of a holistic expansion of the Aviation Academy, which includes a new auditorium, commercial and cabin crew training classrooms, an MTS workshop, an administrative building and MTS/PTS classrooms. The expansions to the academy will be inaugurated in a ceremony on Tuesday 06 February 2015.