US president H.E. President Barack H. Obama along with US Government Senators and House of Representatives paid a visit to Ethiopian Airlines, the largest Airline in Africa, during the president’s three days official Visit to Ethiopia, 26 to 28 July 2015.

Prior to his departure at Bole International Airport, the president visited the first Ethiopian B787 Dreamliner dubbed "Africa First" and held brief discussion with Mr. Tewolde GebreMariam, CEO Ethiopian Airlines Group. President Barack Obama expressed his appreciation for the longstanding partnership between Ethiopian and the Boeing Company; recapitulating his visit at the Boeing assembly line, he has extended his pleasure to see the Boeing 787 Dreamliner in Ethiopian flag. 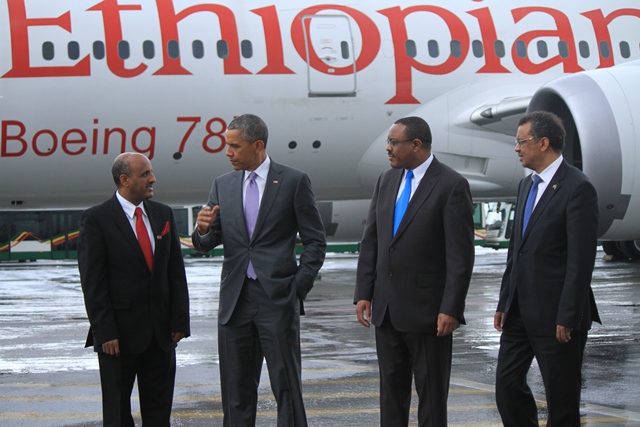 Mr. Tewolde Gebremariam, CEO Ethiopian Airlines Group briefed the President that Ethiopian has 13 B-787 Dreamliners in operation and has 8 on order. He also expressed his happiness on the overall performance of the B-787 Dreamliners reiterating the unique features of the state of the art fleet. He noted that the B787 is very popular among customers, has more cabin humidity which reduces fatigue and dryness, has large windows, is the quietest airplane in its category, saves 20% fuel burn compared to other airplanes in its category and is the most environmentally friendly aircraft.

Addressing the president’s query regarding Ethiopian most profitable routes, the CEO highlighted that Ethiopian is currently flying to 91 international destinations in five continents, among which Washington DC, Beijing, Shanghai, Changzhou, Hong Kong, Luanda etc are the most profitable ones. He stated that in line with the existing close work relations with USA Exim Bank, Ethiopian will continue its efforts for the re-opening of the USA Exim Bank as it is the guarantor of the loans for the purchase of ET’s Boeing Airplanes. Moreover, in recognition of the historic contribution of Colonel Robinson to Ethiopia and the Ethiopian people, the CEO affirmed his decision to name one of the incoming new airplanes after Colonel Robinson.

On the previous day, US government senators and house representatives have also visited Ethiopian Aviation Academy and the B787 and Q400 flight simulators, during which, vital training agreement aimed at enhancing Ethiopian Training capability has been signed. In conclusion of his visit, President Obama congratulated Ethiopian Airlines for successfully running the largest airline in Africa.

Ethiopian Airlines (Ethiopian) is the fastest growing Airline in Africa.  In its operations in the past close to seven decades, Ethiopian has become one of the continent’s leading carriers, unrivalled in efficiency and operational success.

Ethiopian commands the lion share of the pan-African passenger and cargo network operating the youngest and most modern fleet to more than 90 international destinations across five continents. Ethiopian fleet includes ultra - modern and environmentally friendly aircraft such as the Boeing 787, Boeing 777-300ER, Boeing 777-200LR, Boeing 777-200 Freighter and Bombardier Q-400 with double cabin. In fact, Ethiopian is the first airline in Africa to own and operate these aircraft.