Ethiopian Airlines, the fastest growing and most profitable African airline, is pleased to announce that it has won two coveted awards in the first East Africa Careers in Africa Choice Awards, at a top tier event hosted by the Global Career Company, held on September 8th 2016 at the Luxurious 5 star Radisson Blue, Nairobi. 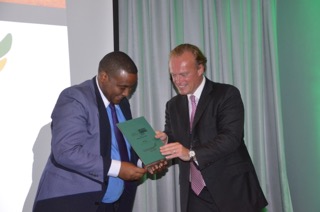 A/VP Corporate HRM Ethiopian Airlines, Mr. Wasihun Asres, remarked while receiving the award, “I am honored to receive these awards on behalf of the Ethiopian family. This regional award is a testament of Ethiopian commitment and great investment in its Human Capital, one of the four pillars in our strategic road map,Vision 2025. As clearly stipulated in our value statements also, Ethiopian is an Equal Opportunity Employer committed to diversity and fairness. Moreover, such  recognitions that are based on real votes and inputs from a wide variety of data points will definitely boost and encourage us all to further work on developing and investing in our Human Capital. As a global African airline that’s growing fast, we are proud to be able to hire the majority of our staff from locally based talent.”

Ethiopian commands the lion’s share of the pan-African passenger and cargo network operating the youngest and most modern fleet to 93 international destinations across five continents. Ethiopian fleet includes ultra-modern and environmentally friendly aircraft such as Airbus A350, Boeing 787, Boeing 777-300ER, Boeing 777-200LR, Boeing 777-200 Freighter, Bombardier Q-400 double cabin with an average fleet age of five years. In fact, Ethiopian is the first airline in Africa to own and operate these aircraft.