Ethiopian has earned another industry honor, "Airline of the Year Award" at the 41st Annual General Assembly of the African Airlines Association (AFRAA) held in Maputo, Mozambique on November 24, 2009. According to AFRAA, the award was presented to Ethiopian Airlines "In recognition of its outstanding, efficient and exemplary provision of Airline services to the African airline industry."

Mr. Paulo Zucula, Transport Minister of Mozambique handed out the award to Ato Girma Wake, CEO of Ethiopian Airlines at the Gala Dinner held on November 24, 2009 in Maputo, Mozambique. Commenting on the award, Ato Girma said, "We are indeed honored to receive this award which, once again, reaffirms our commitment to meet the needs of African aviation" and further added, "The recognition, coming at such a challenging time for the airline industry, is an acknowledgement of our continued hard work and dedication to provide outstanding service to our customers." 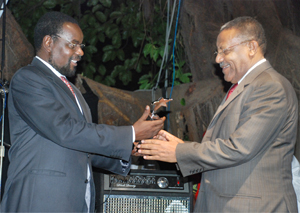 Ethiopian has frequently been chosen as the best Airline in Africa for its performance and outstanding contribution to the development of African aviation. In addition to the AFRAA award, Ethiopian has received four significant awards in a row since January, 2009.

The Annual General Assembly which took place from November 22 to 24, 2009 was attended by the Chief Executive Officers of African airlines, senior officials representing the civil aviation and airport authorities, regional and international aviation organizations and regional economic community leaders as well as global aircraft manufacturers led by Airbus, Boeing and Embraer.

Ethiopian Airlines, one of the largest and fastest growing airlines in Africa, made its maiden flight to Cairo in 1946.

In August 2008, Ethiopian won the 2008 Corporate Achievement Award of Aviation & Allied Business for setting the pace towards the development and growth of the African aviation industry.

Ethiopian is also the first African carrier to win the 2008 Brussels Airport Company Award in recognition of its distinguished long haul operations witnessed through the introduction of new routes, new products, and close cooperation with Brussels Airport in marketing activities.

Ethiopian was the winner of the ‘2008 Best Airline in Africa Award’ at the African Travel Award in Lagos, Nigeria, for its excellent network and convenient connections in Africa.