Ethiopian Airlines, the fastest growing and the largest African airline, is pleased to announce that it has won the African Aviation ‘African Airline of the Year’ Award for 2016 during the 25th Anniversary African Aviation Air Finance Africa Conference & Exhibition and African Aviation Summit held on  May 11, 2016  in Johannesburg, South Africa.

The award was presented to Ethiopian in recognition of its financial performance, fleet modernization, route network expansion, in-flight service, overall customer care and its outstanding contribution to aviation development in Africa. 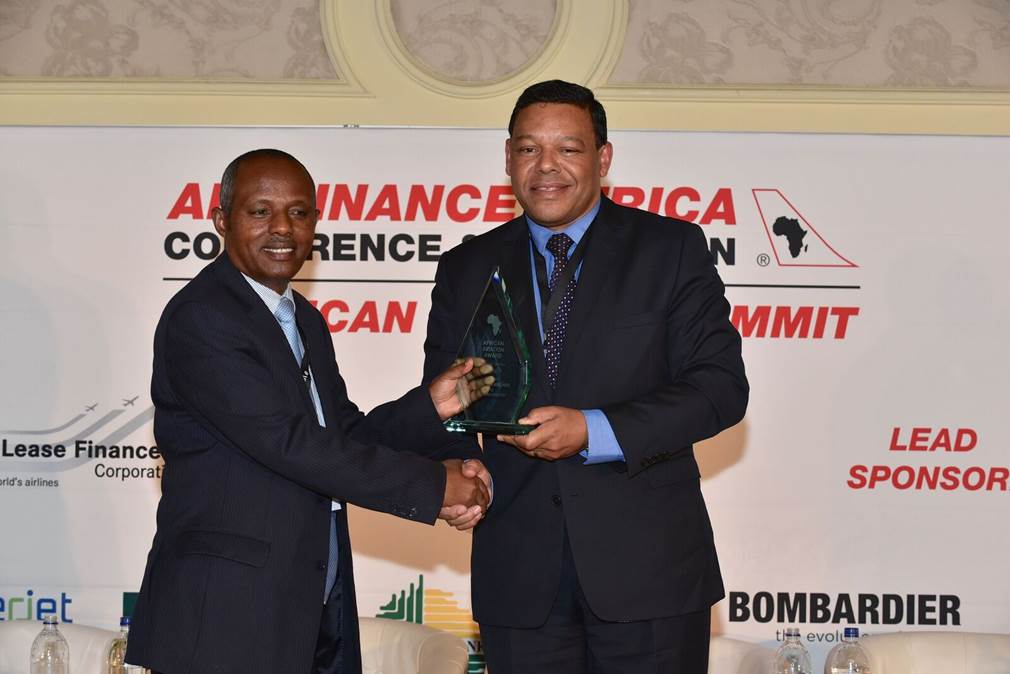 Commenting on the award, Mr. Mesfin Tassew, Chief Operating Officer Ethiopioan Airliens, said, “ We are pleased to win the ‘African Airline of the Year 2016 Award’, which is a testimony of Ethiopian 70 years of commitment to bring Africa together and closer to the rest of the world. It is also a recognition of the visionary leadership of Ethiopian management and the hard work of thousands of Ethiopian employees who work hard to keep our beloved airline shining in the skies. On behalf of the Ethiopian Executive Management and myself, I would like to thank African Aviation for the recognition.”

Presenting the award, Mr Nick Fadugba, CEO African Aviation, remarked, “Ethiopian Airlines continues to set the pace through its tangible achievements and is a source of great pride to Africa. In addition, ET has also excelled in the provision of technical services to African and non-African airlines and has made an enormous contribution to the development of Aviation Human Resources for the African continent, particularly in the fields of aircraft maintenance, pilot and cabin crew training.”

Ethiopian is a multi-award winning airline, including "Best Airline to Africa", for a second year in a row, and “Best Airline in Africa” by one of the most prominent travel magazines in the United States - Premier Traveler, the APEX Passenger Choice Award, the most extensive survey of passengers in the industry, CAPA Airline of the Year Award, AFRAA Airline of the year award, for the fourth year in a row, are few to mention.

Ethiopian Airlines (Ethiopian) is the fastest growing Airline in Africa. In its seven decades of operations, Ethiopian has become one of the continent’s leading carriers, unrivalled in efficiency and operational success.

Ethiopian commands the lion’s share of the pan-African passenger and cargo network operating the youngest and most modern fleet to 92 international destinations across five continents. Ethiopian fleet includes ultra-modern and environmentally friendly aircraft such as the Boeing 787, Boeing 777-300ER, Boeing 777-200LR, Boeing 777-200 Freighter, Bombardier Q-400 double cabin with an average fleet age of five years. In fact, Ethiopian is the first airline in Africa to own and operate these aircraft.