In a ceremony held on November 25, 2009 at Gallagher Convention Centre in Johannesburg, South Africa, Ethiopian won the NEPAD Transport Infrastructure Excellence Awards 2009. According to NEPAD, Ethiopian was honored as an institution in Africa that contributed to the development of transport infrastructure in the continent in line with the aims and objectives of NEPAD and the African Union. The development of transport infrastructure is seen as an important component and a prelude to regional integration. The contribution of Ethiopian Airlines in facilitating the regional integration through its long standing motto "Bringing Africa Together" and its continuous effort to build modern infrastructure has helped it stand out among its African compatriots.

Ethiopian Airlines has currently embarked on rapid growth strategy, investing in various infrastructure developments to support the growing passenger and cargo business. In the last five years, the airline has made huge infrastructural investments. Some of the projects carried out by the airline were the construction of the state-of-the-art Cargo Terminal and Maintenance Hangar as well as the purchase of B737-7/800 New Generation Simulator. 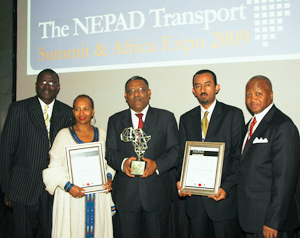