Ethiopian Airlines was proud and honored to have brought back home the Ethiopian athletes who made history in the 2008 Beijing Olympics. The Ethiopian Athletics team arrived at Addis Ababa on August 27 2008 on board ET-605. H.E Prime Minister Meles Zenawi, high government officials, family members, hundreds of sport enthusiasts and Ethiopian Airlines officials welcomed the athletic team at the Addis Ababa Bole International Airport.

The captain in command of the flight ET-605 welcomed the returning heroes from his cockpit by saying “We congratulate you all for a mission well accomplished. We are proud of you and privileged to have you fly with us today.” To commemorate the victory the captain invited the Olympic heroes; Athlete Kenenisa Bekele and Athlete Tirunish Dibaba to cut a cake on the flight. 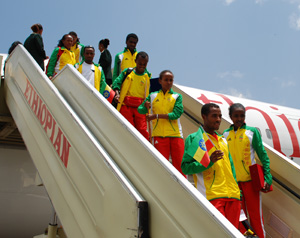 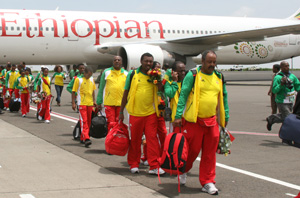 Ethiopian Airlines takes this opportunity to congratulate all athletes on their victory and expresses its best wishes in their future endeavor.

Ethiopian Airlines, www.ethiopianairlines.com, one of the largest and fastest growing airlines in Africa made its maiden flight to Cairo in 1946. The airline currently serves 50 destinations around the globe, 30 of which are in Africa. The addition of service to Kuwait in July 2008 will bring the total number of Ethiopian’s international destinations to 51.