The Ethiopian Aviation Academy graduates 18 trainee pilots who have completed the commercial pilot training courses in Instrument and Multi-Engine Ratings. Among the graduates 12 are sponsored by Ethiopian while the six are Chadian pilot trainees. Included in this group of trainees is a female from Chad.

This batch of pilot trainees has taken a two-year training comprising of one thousand hours of class instructions and 250:00 hours of practical flight training, both of which were given on single and multi-engine trainer aircraft. As part of the pilot training package, every effort has been exerted to inculcate a high standard of responsibility, discipline and safety among the trainees.

The Chief Operating Officer of Ethiopian, Mr. Tewolde G.Mariam gave out the wings to all graduates, and achievement awards to three top performing candidates in the over all academic, flying and good governance.

Today’s graduates will bring the total number of pilots from the Ethiopian Aviation Academy to 822 since its inception in 1964, of which 522 are Ethiopian nationals. The remaining 300 are nationals from different countries mainly from Africa, the Middle East and a few from Asia and Europe. 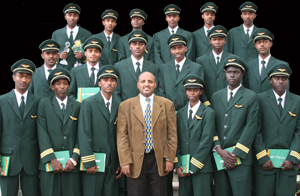 The Ethiopian Aviation Academy plays a pivotal role in the development of commercial aviation in Africa through the training of pilots, aircraft technicians, cabin staff and other professionals.

Ethiopian Airlines, www.ethiopianairlines.com, one of the largest and fastest growing airlines in Africa made its maiden flight to Cairo in 1946. The airline currently serves 50 destinations around the globe, 30 of which are in Africa.