Ethiopian Airlines, the fastest growing and most profitable airline in Africa, is pleased to announce that Ethiopian Airlines Chief Executive Officer Tewolde Gebremariam was awarded the 2015 International Grand Prix special ‪award on Wednesday June 3, 2015 in a ceremony held in Milan.

The prestigious award was bestowed upon Mr. Tewolde Gebremariam for his achievements in developing ‪the airline into the foremost aviation group in Africa and for spearheading the transformation of Ethiopian into becoming one of the fastest growing airlines in the world. Under his leadership, Ethiopian continues to add exciting destinations to its fast growing network, making it the only profitable airline in Africa which not only contributes to the socio-economic development of Ethiopia alone but to Africa as a whole. 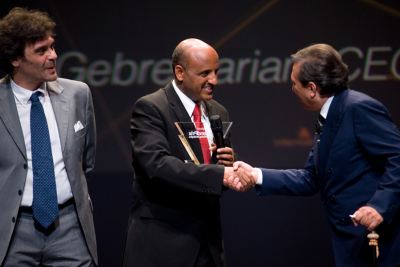 Mr. Tewolde while receiving the award in Milan

While receiving the Award, Ethiopian Airlines Group CEO Mr. Tewolde said, “It is an honor to receive this award and a very good opportunity to showcase to the world that we have been awarded by an independent and largest media group in Italy for our excellence in Africa. We at Ethiopian have achieved greater milestones as one family. I want to dedicate this Award to my colleagues: more than 9,000 brave men and women around the world who are always working hard to position Ethiopian as the global carrier of choice."

The Ethiopian CEO has also won a number of awards including Professional Excellence Award by Planet Africa and the Regional Leadership Award by Airline Business Magazine for his excellence in leading a carrier which provides strong transport links in its geographical region. He is also recognized for realizing the Pan Africanism vision of Ethiopian by implementing a multiple-hub strategy in Africa with its partner airlines ASKY Airlines in Lome, Togo and Malawian Airlines in Lilongwe, Malawi.

Ethiopian Airlines (Ethiopian) is the fastest growing Airline in Africa.  In its operations in the past close to seven decades, Ethiopian has become one of the continent’s leading carriers, unrivalled in efficiency and operational success.

Ethiopian commands the lion share of the pan-African passenger and cargo network operating the youngest and most modern fleet to more than 85 international destinations across five continents.

Ethiopian fleet includes ultra-modern and environmentally friendly aircraft such as the Boeing 787, Boeing 777-300      ER, Boeing 777-200LR, Boeing 777-200 Freighter and Bombardier Q-400 with double cabin. In fact, Ethiopian is the first airline in Africa to own and operate these aircraft.