Ethiopian Airlines, the largest, fastest growing and most profitable airline in Africa, is pleased to announce that it has won CAPA Airline of the Year Award, one of the top airline awards, at the 2015 CAPA Aviation Awards for Excellence, held on 7 October, 2015 in Helsinki as part of CAPA’s 2015 World Aviation Summit.

CAPA - Centre for Aviation (formerly the Centre for Asia Pacific Aviation) is the leading provider of independent global expertise in aviation market intelligence, analysis and data services covering worldwide developments. The CAPA awards for Excellence are independently researched by CAPA and Heidrick & Struggles and selected by an independent International panel of judges.

Ethiopian was selected by the judging panels for its ability to establish pan-African operations and thrive in an increasingly important emerging market; being the biggest standout strategically during the year and emerging as the leader in Africa with a pioneering strategy, which has the greatest impact on the development of the airline industry thereby establishing itself as a leader, providing a benchmark for others to follow. 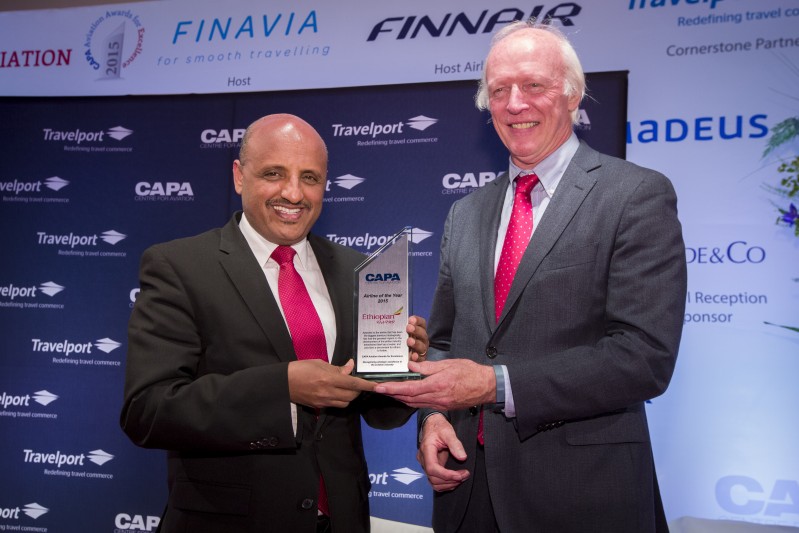 Mr. Tewolde GebreMariam, Group CEO of Ethiopian Airlines, remarked while receiving the award at a gala dinner, “I am humbled to be honored with this prestigious award of CAPA Airline of the Year which is a demonstration and recognition of our fast and continuous growth, outstanding performance and our Pan-African stance in bringing Africa together and closer to the world. I wish to thank CAPA and the panel of judges for recognizing our contribution in serving Africa and our contribution to the development of the African Aviation.The award goes, first and foremost, to the more than 9000 employees at Ethiopian who are working hard day-in and day-out and managed to make our beloved airline the leading, fast growing and the most profitable airline in Africa, despite the uniquely challenging operating environment prevailing in the continent. It is also a testimony of the remarkable success of our Vision 2025 fast, profitable and sustainable growth strategy.

The award is also a testimony of the success of our business model, which is the diversified aviation business and which will make Ethiopian the Leading Aviation Group in Africa by 2025. We will continue our leadership in the African Aviation industry and connecting mother Africa with its major global trading centers. We currently offer an extensive network, ideal connectivity options which guarantee the fastest and the shortest travel time between any destinations in the continent of Africa and to all 90+ of our global destinations as convenient as possible.”

“Ethiopian has doubled in size since the beginning of the decade while most other major African carriers have grown only slightly or not at all, successfully expanding its hub operation” said      Mr. Peter Harbison Executive Chairman of CAPA. “It has been consistently profitable over this period while most of its competitors in Africa have struggled financially in recent years.”

CAPA noted that Ethiopian has rapidly expanded its network in Africa, and its position in Africa has been further strengthened by pursuing joint ventures and investments in other African carriers Ethiopian has also pursued rapid and successful expansion in Asia, where it now has 11 destinations, positioning Addis Ababa as the leading hub for the growing Asia-Africa market despite intensifying competition for such traffic from the Gulf carriers/hubs. Several new partnerships have been forged including with ANA, Singapore Airlines and United Airlines, leveraging Ethiopian’s membership in Star.

Ethiopian also celebrated several prestigious awards in 2015, including the APEX Passenger Choice Award the most extensive survey of passengers in the industry, the AFRAA “Best airline in Africa” award, the “Best international airline of the year” by Business Executive Excellence, are few to mention .

Ethiopian is a truly indigenous Pan-African global carrier that operates the youngest and the most modern fleet in the continent with an average aircraft age of less than 5 years with more than 232 daily departures.

Ethiopian Airlines (Ethiopian) is the fastest growing Airline in Africa.  In it’s close to seven decades of operations, Ethiopian has become one of the continent’s leading carriers, unrivalled in efficiency and operational success.

Ethiopian commands the lion share of the pan-African passenger and cargo network operating the youngest and most modern fleet to more than 91 international destinations across five continents. Ethiopian fleet includes ultra-modern and environmentally friendly aircraft such as the Boeing 787, Boeing 777-300ER, Boeing 777-200LR, Boeing 777-200 Freighter, Bombardier Q-400 double cabin with an average fleet age of five years. In fact, Ethiopian is the first airline in Africa to own and operate these aircraft.