This management contract is an important move marking an historic intra-African co-operation in the airline business. The agreement helps the two carriers to develop a West African hub in Lome, Togo for the regional and inter-continental routes. The West African region is one of the highest growing economies in the world.

ASKY is a multinational private airline initiative geared to meet the growing demands for safe, reliable and competitive air transportation services in Central and West Africa. Its equity ownership includes the private multinational ECOBANK and the two major development banks of the region, namely EBID, the Economic Community of West African States (ECOWAS), Bank of Investment and Development, and BOAD, West African Development Bank and South African investors. Ethiopian Airlines will also own a 25% stake in the start-up airline, ASKY. 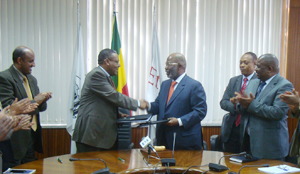 In 1960 Ethiopian, for the first time and single-handedly, pioneered air services to Ghana and Nigeria, thereby cementing the cornerstone for Africa’s uninterrupted East- West connections. The establishment of a hub in West Africa through the signing of the current partnership agreement marks the beginning of yet another milestone in the history of commercial aviation in Africa. It is also a proud testimony for Ethiopian’s dedication and commitment to its customers and Africa.

Ethiopian Airlines inaugurated its operations to Togo in 1989. At present, it flies to Lome four times weekly.

Ethiopian Airlines, www.ethiopianairlines.com, one of the largest and fastest growing airlines in Africa made its maiden flight to Cairo in 1946. The airline currently serves 53 destinations around the globe, 33 of which are in Africa.

In 2008 Ethiopian was the proud recipient of the Corporate Achievement Award from Aviation & Allied Business, the Brussels Airport Marketing Award on its long haul service, and Best Airline in Africa from the Africa Travel Award-Nigeria.